I am calmer, more matured and can now control of my emotions- Jose Mourinho

By Andre Falana On Mar 21, 2017
Share
Join Us On Telegram
The current Manchester United’s manager, Jose Mourinho
claimed that he now has the ability to control is emotion when compared to his
management in FC Porto, Chelsea, Inter Milan and Real Madrid. 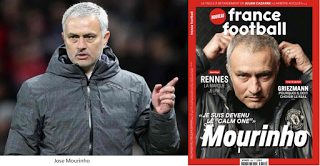 Jose Mourinho has disclosed that he is no longer as harsh,
hot tempered or troublesome as he used to be when he was younger and in his preceding
clubs, saying he can afford to not think about football when he is at home these
days.
In a recent exclusive interview with France Football released
on Tuesday, the Manchester United also spelled out his belief that there is no
team in England that can be fully dominate the league like before as premier leagues
clubs are now more financially independent.
He said: “Mourinho the man tries to be the opposite of what
the manager is.
“He tries to be discreet and calm. To find a way to
disconnect. I can go home and not watch a football match, not think about
football. I can do that. At the start of my career, I couldn’t.
“I was switched on 24 hours a day. I had to find a kind of
maturity. Today I feel comfortable with my personality as a man.
“I’ve matured, I’m more at peace. A win no longer represents
the moon to me, and a defeat no longer means hell. And I think I can transmit
that serenity to the people who work with me, my players.
“I have the same ambitions as before, the same involvement
and the same professionalism. But I am more in control of my emotions.
Related Posts

“You have to adapt to a club’s reality, needs and demands.
“That means being intelligent … the priority is to establish
relationships of love and peace in a group, to create stability. Manchester
United no longer has the super personalities that were Giggs, Scholes or Roy
Keane.
“Rooney and Carrick are still here and they are the last
remnants of that generation, and then there is a new group of players that has
to adapt. That’s why it was important for me to bring in Zlatan
[Ibrahimovic].
“In this team, and without being English and knowing the culture
of the club, he had the personality and profile to be more than just a player.
He continued: “In England the clubs are so powerful
economically that the market is open to everyone.
“Take the example of Bayern in Germany. Do you know when
they start winning the title every year? The previous summer, when they buy
Borussia Dortmund’s best player! Götze, then Lewandowski the following year,
then Hummels last year.
“Me, I came to a club with a great and prestigious history
but that can no longer have things all its own way.
No club in England, whether that be Man United, Liverpool or
Manchester City, can dominate forever. Power is divided. Everything is harder:
buying, winning, building.
“At Inter, I was like a fish in water in that respect. I had
Materazzi, Cordoba, Ibrahimovic, Milito, Thiago Motta … guys who were ready to
follow me everywhere. It’s a different thing to work in a club where players
don’t have the same profile.
“So before heading in any direction, the first thing you
have to do is understand the people with whom you are working.”
footballJose Mourinhomanchester unitedpremier leagueSoccerSport
Share