Graphic Video/Photo: Man killed mother because she insults him too much

Wonders can never seize on planet earth, even it stops in other planets. Crime every where.

In a story shared by Facebook user, Awoniyi Isaac O, the man was said to have murdered his mum because she was always insulting him. He said, she always being victimize him. 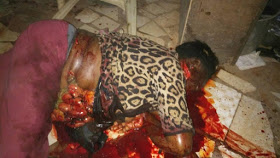 However, from the shared video, it appears the man in question is actually suffering from mental challenges. 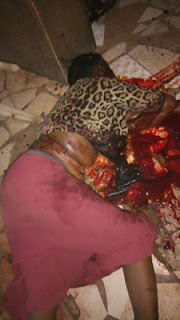 Son killed his Mother or Father is not a news again but I didn’t see it, I taught we are just watched it in a filmA terrible thing and unbelievable,
This one is not a story at all, I went there and confirmed it, because the place closed to my place, this is what happened in our area yesterday at ADELEYE APARADIJA ITELE OTA ROAD, OGUN STATE.
Around 3:45pm I got a called that I should come that there’s fire on the mountain in our area, when I got there by 4:10pm I saw the incident saw the woman and Son,
There’s a Yoruba proverb says “TI OMODE BA DE IBI ERU ERU MA BA” and another one says “TI ENIYAN BA JE ORI AHUN TI O BA DE IBE YIO SOKUN”
I don’t want to mention his name
Many people are asked that the man is mad person, or what is wrong with him?
Well… We have hand over him to police

?
The son is at custody of police at Itele police post since yesterday and they have taken the copse to mortuary. This is some of pictures and video.

Why a Son will told his Mother that give me food I want to eat and killed his mother slaughtered her and stabbed her to death.”