By Andre Falana On Mar 13, 2017
Share
Join Us On Telegram
A Nigerian Air Force personnel has been reportedly been shot
dead by a jealous lover who was also her colleague.
Details of the report are still unclear, but Punch News
reported that the deceased, most called by her friends as Shomzy Shomzy, was murdered by her aggrieved lover.
The report claimed the murderer, allegedly to be her
boyfriend was also an officer. The incident allegedly occurred at the Makurdi Air
Force Base, Benue State.
Related Posts

Though, the murderer has been reportedly apprehended and said
to be in custody of the Air Police in Makurdi.
Friends of the female officer, have taken to social media to
mourn her.
A friend said: “R.I.P
Shomzy shomzy your death is some thing I can’t forget so easily because your
military plans is still in your mind. Well I can’t continue crying my dear, all
I have to do is to let go of what I can’t change.”
Another one said: “Would
time permit more life to you, you would have made the best air Marshall. But
Little did you know it .. you were robbed of ur precious life by the cruelty of
man. So sorry dear , for it is written . No one knows when it shall become his
or her last day.. farewell soldier!!” 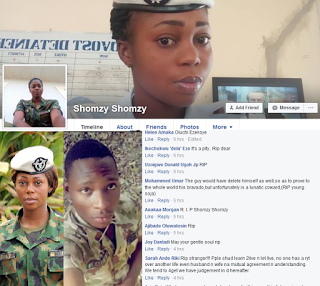