Customs boss, Hameed Ali walked out by Senate, ordered to re-appear in his uniform

By Andre Falana On Mar 16, 2017
Share
Join Us On Telegram
The Senate, on Thursday, March 16, has walked out the
Customs Comptroller General, Col. Hammed Ali from its chambers following his defiance
in flouting its order.
Recall that Ali was ordered to put on his Customs Service
uniform when appearing at the senate today, Thursday but failed to do so and
has been asked to return next week Wednesday, March 22, by 10AM in uniform.
Related Posts

The Senators told that Ali he should be a leader by example.
Deputy Senate President, Senator Ike Ekeremadu had formerly
queried the Comptroller General for not putting on his official uniform.
In Response to the query, Ali claimed that the letter
inviting him did not suggest that he should appear in uniform. 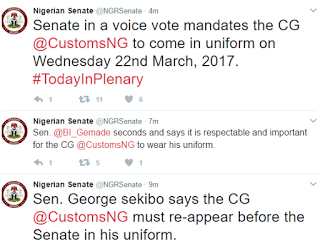 Reps to investigate Customs ban on sale of seized goods