By Andre Falana On Mar 19, 2017
Share
Join Us On Telegram
The Nigeria Police Force, NPF, has imprisoned the
Commandant-General of the Peace Corps of Nigeria, Dickson Akoh.
The police detained the Peace Corps boss on Sunday, March 19
following his submission for questioning at the police command in Abuja. 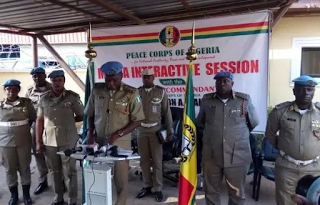 Akoh was said to have been in his state origin, Benue where he
had been receiving traditional medical care due to his ill-health.
He was held back at exactly 5:40pm on the directive of a
senior officer of the Criminal Investigation Department, CID.
According to NAIJ.COM, Akoh is presently at the office of
Special Anti-Robbery Squad,SARS, where he is being detained.
Related Posts

A group of newsmen, who went to SARS to ascertain the detention
were sent away by security operatives who shot in the air twice.
Another effort was made to get some information at the FCT
Police headquarters by journalists proved abortive as stiff resistance by
policemen was encountered at the entrance of the force building.
Recall that the Nigeria Police Force had previously declared
Akoh wanted.
Following all abortive effort in obtaining some information
on the development, it was finally possible to reach the FCT Police public
relations officer, ASP Manzah through the phone, who said he doesn’t have information
of the arrest.
In reaction to the incident, the Peace Corps’ spokesperson,
Patriot Millicent Umoru noted that an Admin Officer of the police she simply known
as “Mr Abdullahi” threatened to ”kill someone” seemingly referring to
Akoh.
Speaking to NAIJ.COM via phone conversation, “Should anything happen to him (Akor), we
will hold him (Abdullahi) responsible, because he was saying it openly.”
ArrestCrimeDetainedDetentionDickson AkohNewsNPFPeace Corps
Share