By Andre Falana On Mar 29, 2017
Share
Join Us On Telegram
A former SSS official has been arrested for reportedly stealing N310 million allegedly belonging to the Senate President, Bukola Saraki 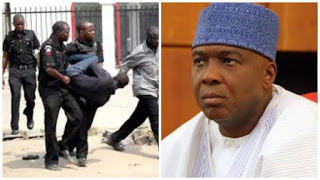 The Nigerian Police have apprehended Abdulrasheed Maigari, a 35-year-old former operative of the State Security Service, SSS, who was dismissed from the service due a robbery offence he commited. He was said to have robbed a bureau de change operator.
Maigari was apprehended in Abuja by anti-kidnap squad of the police in a surveillance operation, conducted between March 26 and 28.
Maigari, who hails from Taraba State, was arrested alongside 10 other suspected criminals for supposedly kidnapping a former General Manager of Peugeot Automobile Nigeria, Issa Salami.
In a statement released by the police spokesperson, Jimoh Moshood, the other suspects are identified as follows:

Recall that, reports said in December 2015, the SSS announced the arrest of its agents, that included Maigari, who was said to have robbed a bureau de change operator in Abuja of N310 million.
Related Posts

However, the service was silent on the identity of the owner.
Meanwhile, in another twist, Sahara Reporters later claimed the owner of the huge sum was the Senate President and gave details on how the Senate President allegedly employed the service of a money changer, Abubakar Dantani, to help transport the money to his abode.
But Maigari and his cohorts in the SSS allegedly robbed the van which was conveying the N310 million cash as it was about driving into Senator Saraki’s residence in Abuja.
However, the Senate President denied ownership of the fund at the period.
According to the police, the robbery case was still pending in court, but Abdulrasheed Maigari was granted bail.
He reportedly moved to another gang that had been terrorising the residents of Abuja metropolis in the last few months before his arrest this week in connection with Salami’s abduction.
The following arms and ammunition were retrieved from the suspects: two pistols, three AK 47 magazines, One AK 47 rifle, ninety rounds of 7.62mm live ammunition, fourteen rounds of 9mm live ammunition.
2 bedroom apartments used by the suspects at various locations in Suleija, a next door town to Abuja, were also recovered and would be use as exhibit, according to the police.
Moshood stated that Maigari and his cohorts will be charged to court after the completion of investigation.
Abdulrasheed MaigariBreakingBukola SarakiCrimeNewspolice
Share

Ali Ndume who moved a motion for probe of Saraki and Dino, has been suspended for 6 months