By Andre Falana On Mar 21, 2017
Share
Join Us On Telegram
Microsoft co-founder, Bill Gates has again rule Forbes
magazine list of the world’s richest billionaires, for the fourth straight time,
with a wealth of $86 billion.
Second on the list is the Berkshire Hathaway chief, Warren
Buffett, with an estimated fortune of $75.6billion, followed by Jeff Bezos, the
founder of Amazon, with an estimated net worth of $72.8billion. 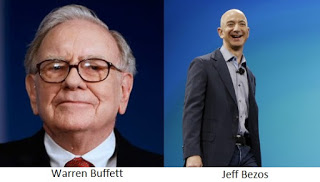 Fourth on the list is Amancio Ortega, the founder of Inditex
fashion group, net worth of $71.3billion, while the fifth is the Facebook
founder, Mark Zuckerberg, who is said to worth $56billion.

Former world’s richest man, Carlos Slim has been dropped to
six with $54.5billion, while Oracle co-founder Larry Ellison follows him in the
seventh position with $52.2billion worth.
The Republican mega-donors Charles and David Koch are in
eighth and ninth, respectively, both worth $48.3billion, while Michael
Bloomberg, the co-founder of Bloomberg, rounded the top 10 with $47.5billion
worth.
In another twist, the current United States of America,
Donald Trump, dropped down the list to number 544 with an estimated net worth
of $3.5billion, cutting off $1billion from his valuation in the same list in
2016.

Find the Top 20
richest men on earth below:
Related Posts

I am calmer, more matured and can now control of my emotions- Jose Mourinho