By Andre Falana On Mar 20, 2017
Share
Join Us On Telegram
April 25 fixed to determine
the fate of detained leader of the Indigenous People of Biafra, IPOB, Mazi
Nnamdi Kanu and his dupties.

The frontrunner of
Indigenous People of Biafria, IPOB, Mazi Nnamdi Kanu’s admiration appears to be
greater than before as Igbo elders storm Abuja High Court

“We won’t submit to
secret trial” says defendants
The Federal High Court in Abuja, had on Monday, March 20,
2017, fixed April 25 to decide the fate of the detained leader of the Indigenous
People of Biafra, IPOB, Mazi Nnamdi Kanu, whether he should be released on bail
pending his trial or not.
Trial Justice Binta Nyako in the same vein adjourned to rule
on individual bail applications by three other pro-Biafra campaigners, Benjamin
Madubugwu, Chidiebere Onwudiwe and David Nwawuisi, who are facing trial along
with their leader, Kanu.
The defendants who are battling with the five-count criminal
charge against them by the Federal Government, through their separate lawyers, pleaded
the court to grant them bail.
They insisted that all the charges FG pressed against them
were bailable allegation. Mr. Ifeanyi Ejiofor, who is the lawyer representing
the group’s leader, Kanu, maintained that the court had in a ruling on March 1,
2017, quashed six out of eleven count charges FG initially levelled against the
defendants.
He said that allegations that were quashed by the court centered
on criminal conspiracy and assumed contribution of the defendants to the acts
of terrorism.
Ejiofor said that part of the charge having been wipe out by
the court, so there is no reason for Kanu and the others to still remain in detention.
The lawyer’s argument was embraced by counsel to all the
other defendants, who upheld that going by the pending charges, they are no
longer body of security threat to certify their continued incarceration.
In the interim, Justice Nyako also fixed April 6 to decide
the merit of application by the defendants, requesting to differ the order that
gave FG the permission to protect personalities of all the witnesses due to
testify against them.
The trial Judge did not only approved the witnesses to
testify anonymously, but also granted an order authorising them to use fake
names.
However, the court agreed to keep the identities of the
witnesses from the public, it held that only the defendants and their attorneys
would be permitted to see them.
Displeased with the verdict, all the defendants applied for
a review of the verdict, insisting they would not succumb themselves to any
form of secret trial.
Kanu had asserted that he would want an open hearing and newsmen
must be allowed to see faces of those testifying against him.
He said: “I was accused in public and I must be tried
in public. No one can try me in secret! No secret trial! I will not accept
that, no way!”
Kanu yelled from the dock at the last adjourned date.
Recall that Justice Nyako quashed six count charges against
the Kanu and other on the ground that they were no enough proof of evidence to
support the charges FG adduced against them.
The Judge insisted that none of the six allegations nailed
any of the defendants against a criminal case. She noted that the fact that
IPOB was an unregistered organisation in Nigeria, did not subject them to an
illegal society.
Related Posts

She stated: “It may be true that IPOB is not registered
in Nigeria, but does that make it an illegal organisation.”
While the court labelled some of the dismissed charges as ‘hollow’ and ‘scanty’, it however maintained the other five charges against the
defendants.
For example, the court said that FG did not produce any
evidence to support the charges, in count-nine of the charge that the 2nd
defendant, Onwudiwe, as National Coordinator of IPOB and Nwawuisi, serving as
MTN field Maintenance Engineer in Enugu State, collaborated to install Radio
Biafra transmitters on MTN masts located at Ogun Road close St. Michael Church,
Enugu, having contracted for the payment and receipt of N150, 000.
Furthermore, the accusation that Onwudiwe committed an act
preparatory to an act of terrorism by making research for the reason of finding
and gathering of improvised explosives device, IED, providing materials to be
used against the country’s security operatives doing their lawful duties.
Justice Nyako noted that FG ought to have cast allegation of
intention to commit an act of terrorism on Onwudiwe before a Magistrate Court.
She said FG could not found any feature of crime in its
allegation that Nnamdi Kanu had between March and April 2015, smuggled into
Nigeria a radio Transmitter known as TRAM 50L and hid it in a container that
was left in care of the 3rd defendant, Madubugwu, at Ubuluisiuzor in Ihiala
LGA, Anambra State.
Nonetheless, the court insisted that Kanu has a case to
answer relating to allegation in count-four that he was economical with the
truth that the Radio Transmitter was hidden in a container of used household
items which the defendant professed as unused household items.
While the court crushed counts 3, 6, 7, 9, 10 and 11 of the
charges, it however continued with counts 1, 2, 4, 5 and 8.
The sustained allegations, to which all the defendants pressed
for a fresh plea of not guilty on Wednesday, centers on conspiracy, treasonable
felony, publication of defamatory matter and Kanu’s supposed importation of items
contrary and punishable under section 47(2) (a) of the Customs and Excise
Management Act, Cap C45, Laws of the Federation of Nigeria, 2004.
In count 3 of the sustained charges, FG claimed that the
IPOB leader had in a broadcast, produced in London on April 28, 2015, over
Radio Biafra, called President Muhammadu Buhari ‘a paedophile, a terrorist, an idiot and an embodiment of evil’.
Precisely, Kanu who was up till now the Director of Radio
Biafra and Television, is battling 4 out of the 5 outstanding charges.
FG purported that Kanu being the leader of IPOB, collaborated
with his co-defendants and others who are still wanted by the authority, on different
dates in 2014 and 2015, within Nigeria and London, to air on Radio Biafra
monitored in Enugu and other areas, planning for states in the South-East and
South-South zones and some communities in Kogi and Benue states, to withdraw
from the Federal Republic of Nigeria, with a understanding to establishing same
into a Republic of Biafra.
They were alleged to have committed an offence punishable
under section 41(c) of the Criminal Code Act, CAP. C38 Laws of the Federation
of Nigeria, 2004. Madubugwu was indicted of having in his custody at his house,
an Emerald Magnum Pump Action Gun with serial number TS 870- 113- 0046, a Delta
Magnum Pump Action Gun with serial number 501, and 41 Cartridges/ Ammunition,
without lawful authority or licence.

On arrival of Nnamdi
Kanu and his co-defendants
Meanwhile, The leader of Indigenous People of Biafria
(IPOB), Nnamdi Kanu’s admiration got a boost on Monday, March 20, 2017 before
the court proceedings as traditional rulers, Igbo elders and women crowded the
Federal High Court, Abuja, chanting, singing and praying ahead of his bail trial.
See photos below: 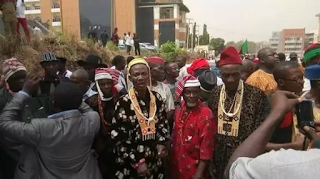 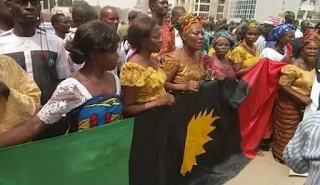 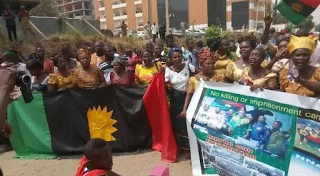 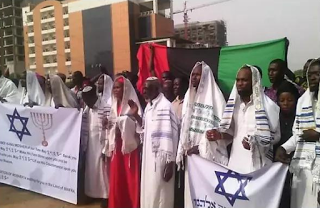 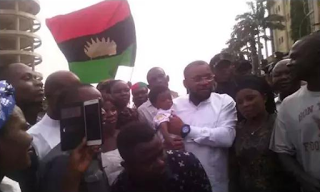