“Anytime you discover that I am corrupt, expose me.” – says Magu, after Senate rejected him

By Andre Falana On Mar 15, 2017
Share
Join Us On Telegram
Sequel to his second rejection by the Senate, the acting EFCC chairman, Ibrahim Magu, says he will not care about his rejection by the senate today, he will never relent in his fight against corruption till his last day in office. 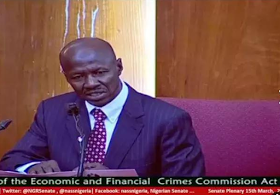 Also read: MAGU failed again. Senate rejects Magu’s nomination as DSS disqualifies him again.
He made the statement while addressing a coalition of civil society groups at the entrance to the National Assembly, immediately following his rejection by the senators.
He said: “My priority is to fight corruption. My confirmation has not changed anything. We have always been on duty I will work until the last day whether confirmation or no confirmation.

“The greatest violation against human right is crime against the society and the humanity but everybody has a duty and responsibility to fight corruption and I also has a responsibility.

“I assure you that we will fight to finish. We will never be deterred because what we are doing is trying to investigate what has gone before and protect the future of our children and our future generation.
Related Posts

“Anytime you discover that I am corrupt, expose me.”

Also, speaking about the allegations made by the DSS against him which was the major reason that led to his rejection by the senate.
“Those allegations can not stand the test of time because they can not be proven. You know, you can’t just raise mere allegations without giving the person opportunity to answer you.

“There is issue of fundamental human right and the right of fair hearing is there. Up till this time, DSS has not called me and I am even surprised that the same report is coming back and this time around it is signed by somebody.

“I doubt the genuineness of that report. But I think we need to identify those who have the interest of this country at heart.”

If you keep denying, God will expose you – Otobo to Apostle Suleman

Fanta or Sprite can be taken with “Vitamins C”, it’s not poisonous – NBC

Video: “I am not corrupt and I don’t like money” – Rotimi…