7 reasons why we believe French diplomat is dreaming – IPOB

By Andre Falana On Mar 15, 2017
Share
Join Us On Telegram
The Indigenous People of Biafra, IPOB, has said that Denys
Gauer, who is the French Ambassador to Nigeria is dreaming over the comment he
made about Biafra agitation.
The IPOB also said that the ambassador does not have the
adequate knowledge of his host country and needed to refer to his history. 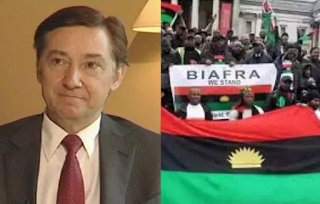 On Monday, March 13, 2017, Gauer told Guardian Newspaper
that there is no future for Biafra despite its campaign for independence.
He claimed that the French government will never support any
individual or group seeking for separation from Nigeria as a country.
He also said that France was in collaboration with the
country in its war against insurgency, further saying that the war against
insurgency had brought Nigeria and France together, more than ever before.
Gauer stated: “Biafrans
have no future in the zoo called Nigeria, but we have future outside Nigeria.
This statement you made is indicative of the Imperialist and philosophical
principles the so-called Western world have towards Africans in general.”
But in a swift reaction to Gauer’s comment, the IPOB said
the French ambassador must be dreaming.
The IPOB also claimed that its agitators have always
respected and maintained good relationship with the French country.
IPOB said: “We
did not count on you when we started and will not count on you when you declare
us your enemy.”

Read below the 7
reasons IPOB gave to support its claim that the French ambassador is dreaming:

1. What right do you have to enforce slavery and genocide against
African countries by encouraging their killing of one another?
Related Posts

The issue of BIAFRA did not start today, and in case you are not up to
date with a number of crimes committed by a government on a particular race of
BIAFRANS OF (EASTERN NIGERIA), from 1914 up to March 2017. Please go back and
do your research.

2. As an Ambassador you should know the history of the country you are
assigned. If as a human being with conscience and you watched and learned about
the 1967-70 genocidal war by your host country where over three million
innocent women and children where starved to death, not including the ones shot
and indiscriminately bombed at open markets, schools and makeshift hospitals,
you should be extremely guarded and be able to to have a way out in event your
declaration was a mistake.

3. Your support for Nigeria to fight Boko Haram is within the absolute
right of the French government.

If you like sell them your Mirage planes, missiles, and pan hard, we
the Biafrans have no say. You blindly and foolishly support the Nigerian
military that in turn feed the Boko Haram you think you are fighting the
Nigerian military, in turn, gives those arms back to Boko Haram.

This is not the first nor will it be the last of your failed foreign
policies. You were paying the price when you went to the Iraqi war, and today
you are back at it again. The same thing will happen to you in Nigeria, and it
will be very very costly to your country.

4. What is the correlation between Boko Haram insurgency in the Muslim
North and their destined policy with the federal government of Nigeria to wipe
off all Biafrans and take over their land as it relates to us Biafrans who are
trying to avoid being exterminated by the Government you are supporting?

5. You have continued to keep mute with regard to NIGERIA’S violation
of all sorts of United Nations rules, even the Amnesty International report.
You are supporting any British blunder even when you could have carried out
respectable principles.

Your covert support for a genocidist Mohammad Buhari who committed more
crimes than Saddam Hussain, Idi Amin or even Milosovich of the Yugoslavia
raises more questions than answers as to the genuineness of the United Nations,
it’s composition as well as equitable and impartial application and enforcement
of its rules.

6. Your pronounced support for a genocidal and criminal gives credence
to NIGERIA’S military denial of its genocidal acts against Biafrans even with
undeniable and irrefutable videos.

Your support bolsters Nigeria’s courage to abuse your own agency The
Amnesty International because Britain and France are completely behind their
atrocities. Your revelation is a blessing in disguise. Now we know why Nigeria
is doing what it is doing and the powers behind it.

7. For all intents and purposes, France is a conspirator with Britain
to effect as quickly as possible the extermination of Biafrans because France
once highly regarded when it comes to foreign policy and fundamental human
rights of people during the era of President Charles Degaul have degenerated
into an era of visionless diplomats whose ultimate goal is to plunder the
resources of poorer countries for their personal benefits and not even for the
French.
If your miscarriage of principles is a pay back to Nigeria for giving
you part of BIAFRA as part of war loot and booty, you would have avoided taking
a wrong and shortsighted course.
biafraFranceIPOBNews
Share

Photo: Lady brutalized by Nigerian Soldier for challenging him on why he slapped her brother