By Andre Falana On Mar 21, 2017
Share
Join Us On Telegram
The Fulani herdsmen
had reportedly slew a farmer who had constantly complained about their actions 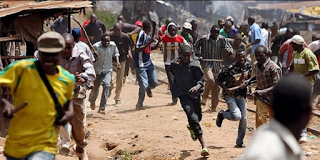 An attack launched by Fulani herdsmen on Yakira village in
Baruten local government, Kwara state, has left four people killed and many
others injured.
According to Vanguard, the herdsmen were on revenge mission after
the killing of three of their colleagues in reprisal to the killing of an
indigene of Yakira.
Related Posts

It was gathered that the indigene, whose death allegedly caused
in the killing of the herdsmen, had incessantly complained about grazing of
cattle on his farmland. Later, he was found dead in the farm.
The chairman of the transitional implementation committee for
council, Alhaji Musa Buge, has confirmed the occurrence of the killings.
He, however, claimed that peace had been restored back to
the community and that measures were taken to have a security meeting of the
council to strategize a way to prevent future re-occurrence.
The police public relations officer (PRO) for the Kwara
state command, Ajayi Okasanmi, also confirmed the killings occurred but could
not give details of casualty during the clash
He also said, the commissioner of police in the state,
Olusola Amore, had demanded an investigation to be carried out on the incident
with a view to bring the culprits to book.
Community clashCrimeFulani HerdsmenKwaraNewspolice
Share

Norway has been rated the ‘Happiest Country’ on Earth