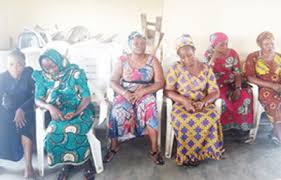 12 women were reported arrested for vending new Naira notes at
a party in Lagos.

Twelve women have been detained for selling new Naira notes in
a party in Lagos. They were apprehended during a raid by officials of CBN and men
of the State Criminal Investigation and Intelligence Department (SCIID), Panti,
Yaba.
According to the Governement officials, their action violates
section 21 of the CBN Act, 2007 and is punishable by N50, 000 fine, or an
option of 6 months imprisonment or may even be both.
Six women were apprehended a week before the other six, the
last set of suspects were arrested this past weekend. Those recently arrested
includes; Bisoye Oyegbile, Fausat Jimoh, Balikis Ajadi, Abidemi Oladejo, Bisola
Amoru and Ajoke Suraj.
Guardian reported that Bilikis Ajadi disclosed that low
patronage of her hair dressing saloon business pushed her into the cash trade.
Bisoye Oyegbile alleged that N37, 500 was collected from her alone, though the
police claimed that N35, 500 was what was recovered from all the ladies
combined. She said, the police usually stole some of their money whenever they
came after them.
The Deputy Commissioner of Police in control of SCIID,
Bolaji Salami, said that trading Naira notes is against the law of the country and
efforts are being made to bring those guilty to book.
Related Posts

He said: “We are
clamping down on those abusing our currency. It is an offence to sell naira notes
at weddings or any gathering. It contravenes the CBN Act. We arrested six
suspects the previous weekend and later arrested six others on Friday.

“We recovered
N35,500 from these suspects but N465,000 was recovered from those arrested last
week.

“They would be charged
to court as soon as possible. Investigation would reveal how these suspects
come about these new currencies. We are going to get to the root of it because
the offence is punishable by N50,000 fine, or six months imprisonment or both.

“No good country
would allow its currency to be abused in anyway. That is what we are guiding
against. The CBN is out to enforce the law and we would give them the necessary
backing.”
A CBN official who preferred anonymity, said CBN was aiming at
its workers and Deposit Money Banks (DMB), as those stimulating the illegal
trade. He also said that CBN will arrests
celebrants in venues where naira traders are found.
He said: “We know that
these are not the real targets because if they don’t get the mint notes, they
won’t be able to sell it. So, our main targets are commercial banks and even
our staff who release the money to these vendors.

“Once these suspects
confess and mention their names, we would go after them. We are also going to
start arresting Nigerians who organise events and allow those selling naira
notes in their venues. Already, we have started arresting people who ‘spray’
money at social events. Sanity must return to our system and our currency must
be respected.”
CrimeCurrencyNairaNews
Share