Stop beating your wife or you will lose your title – Emir of Kano warns Imams, Traditional leaders 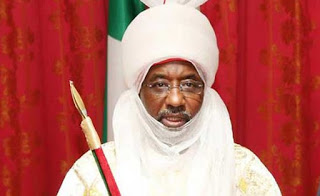 The Emir of Kano, Sanusi Lamido II, has cautioned some of
the traditional rulers and the religious leaders in Kano state who may be found
in the act of molesting of their wives to desist from this terrible action or
else they would be forced forfeit their titles.
Stressing this warning at a mass wedding organized by the
state, during the weekend, the monarch strongly condemned domestic violence in
a home.
He said: “You
should all come back to your senses and stop these barbaric [acts] because we
will not allow this to continue in Kano. I have warned all district heads,
village heads, ward heads and imams to also desist from the bad habit of
beating their wives and whoever among them is reported to me to have beaten up
his wife, would out rightly lose his title.”
The monarch added that
his team is working on a bill that will stop poor men from marrying more than
one wife.
Related Posts

“We are going meet on
Wednesday this week to review the over 80 pages of the law and make the
necessary adjustment before presenting it to the State House of Assembly for
passage into law.

“Our people are facing
serious challenges in their family affairs. We have heard series of complaints
where a father forced his daughter to marry someone against her wish.

“We have heard so many
cases where people marry additional wives while they could not feed them well,
clothe them well or give them good shelter even though they have the means to
do so,” he said.

“In this case, the
proposed law provides that, a court of law would take something out of the
man’s wealth to feed his family, give them shelter and clothes. In the event
the man makes any attempt to resist the court’s directives, then the law takes
necessary action against him. If you know, your salary cannot take care of more
than one wife, you should not get an additional wife” he explained.
NewsSanusi Lamido
Share

What you need to know about MTN M2M