By Andre Falana On Feb 22, 2017
Share
Join Us On Telegram
The National Agency for Food and drug Administration,
NAFDAC, has warned Nigerians to stay away from an allegedly imported garri from
Indian.
The agency is said to have commenced investigation on this
product and also cautioned Nigerians against the consumption of this so called ‘Indian
garri’ 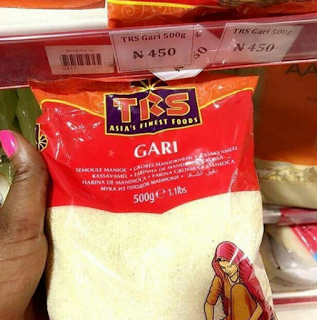 Professor Isaac Adewole, the current Minister of Health, issued
a statement through his twitter handle, entitled On imported garri, Pt 1:

Also speaking on this same issue in Ilorin, Mrs. Yetunde Oni
who is the Acting Director General of NAFDAC, advised Nigerians to stay clear
from the product because its consumption may create serious health hazards, as
the agency is yet to confirm it fit for ingestion.
Mrs. Oni made this statements in Ilorin during a one-day
zonal campaign on current regulatory issues in the safe use of drugs, animal
feeds, pesticides and chemicals.
She also said that, the outcome of preliminary investigation
carried out shows that the said product was made in Ghana and not Indian as
claimed, and that it was later packaged in the UK.
Indian garriNAFDACNews
Share