TellForce Blog
Home News Samsung to introduce a foldable smartphone at MWC
Twitter
Pinterest
Linkedin
ReddIt
WhatsApp
Tumblr
Email
Print
Telegram
Advertisement
Join Us On Telegram
Samsung has been known to be a master of innovations when it comes to technology. Ever wondered how to pocket a big screen in your pocket like a folded newspaper? We are gradually getting 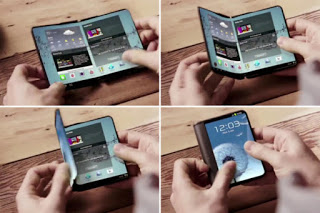 A new report alleged that that Samsung is preparing to showcase a prototype foldable smartphone, alongside a folder panel, at Mobile World Congress later this month.
Although, the device and display technology won’t be displayed on the show floor but will be rather housed in a private exhibition room. This by implication means only selected people will be allowed to enterand view, according to ETNews report.
Reason for this private exhibition is for Samsung to get potential buyers for this product, that is, to pull the interest of firms and device maker present at MWC into the technology.
However, the big guys won’t be the only ones to see new foldable devices from Samsung. It is rumored that the company will present a small number of other bendable tech gadgets at MWC’s show floor, with both inward and outward folding products available for inspection by every participants.
ALSO READ:  A Gold iPhone X By Caviar Is Now Available For $4,510
Advertisment