By Andre Falana On Feb 9, 2017
Share
Join Us On Telegram
Sometimes I wonder if Americans really knows what they want.
They would elect and still complain that we don’t want him. They said no to the
travel ban verbally, yet you see majority still supporting it on poll.
United State President Donald Trump has tweeted out a
Morning Consult/Politico poll that displays 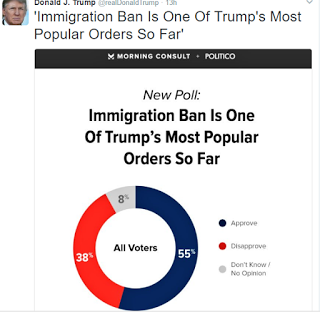 Gallup’s most recent outcomes which was taken between Jan.
30 and Feb. 5 indicates that only 43 percent of Americans approve of the work
Trump’s done and his highest mark has only been 46 percent, three days after
his inauguration last month.
On Wednesday, Trump spoke at a law enforcement conference in
Washington and applauded the immigration ban, claiming it makes Americans
safer.
He stated, “It’s sad,
I think it’s a sad day. I think our security is at risk today. And it will be
at risk until such time as we are entitled and get what we are entitled to as
citizens of this country,” Trump said. “It was done for the security of our
nation. The security of our citizens. So that people come in who aren’t going
to do us harm. And that’s why it was done. And it couldn’t have been written
any more precisely. It’s not like, ‘Oh gee, we wish it were written better.’
It’s written beautifully.”
donald trumpforeignforeign politicsNewspolls
Share