By Andre Falana On Feb 8, 2017
Share
Join Us On Telegram
Yesterday, Teachers at the Federal Government Girls College, Calabar, took a step by staging a peaceful protest to the Cross River House of Assembly over purported assault by officers of Department of State 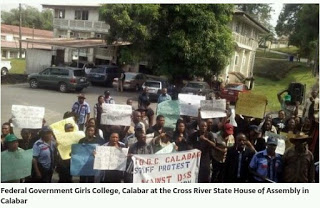 Recall that DSS was alleged to have gone FGGC, Calabar to beat up a teacher for disciplining his student.
This protest was staged under the umbrella of Teade Union Congress (TUC), Cross River chapter and said they were at the assembly to register their grievances over an event that happened in the school on Feb. 2. 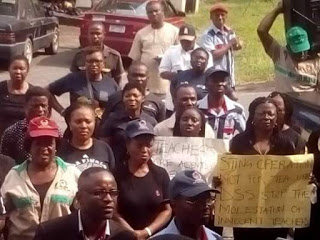 The state Chairman of TUC, Mr Clarkson Otu, who addressed the assembly on behalf of the teachers, said they came to demand for a thorough investigation of the matter and to call for justice.

“We are here to register our grievances over the invasion of FGGC Calabar on Feb. 2 by officials of DSS, where they flogged a teacher before his students.

“And when other teachers demanded to know why, they were beaten thoroughly including a Vice Principal of the school.


“The DSS operatives also shot sporadically into the air and caused serious commotion in the school premises.

“We have come to demand for a thorough investigation of the matter by the authorities and the culprits brought book.

“Sir, we demand that this matter must not be swept under the carpet. That is why we are here,’’ he said.

The TUC chairman said that the teacher was flogged for disciplining his student, who later reported it to her mother through a call and she in turn contacted her sister who is a DSS official.
Placards with inscription like “Stop this oppression”; “Enough is enough;’ “ No more oppression from DSS”’, among others were displayed by the protesters. 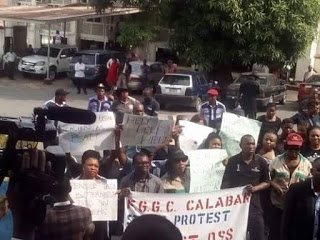 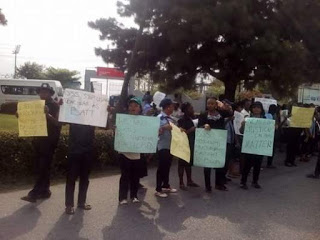 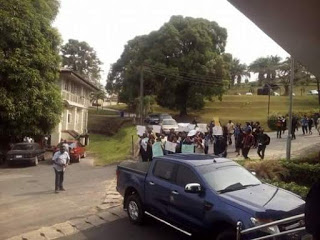 The protesters submitted a letter which was acknowledged by the Clerk of the house on behalf of the Speaker who was unavailable.
Mr Bassey Ekpenyong, The Clerk commended efforts of the TUC for the peaceful protest and described the DSS action as very unfortunate, adding that teachers should be treated with dignity.
The Clerk said,“All of us here were trained by teachers. So, let us treat our teachers with dignity.