By Andre Falana On Feb 17, 2017
Share
Join Us On Telegram
The Benue state police command have detained one Misa
Mohammed for parading himself as an Assistant Superintendent of Police (ASP).
He was said to have been using this position to harass innocent members of the
public. 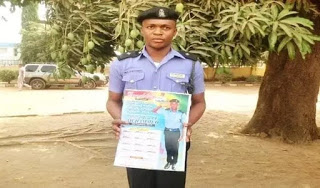 According to a report from Daily Trust, the suspect whose actual
name is Misa Iorliam Francis, seemed
to have been scammed by an illegal recruitment organization. Misa claimed that one
Uche Paul, who he claimed to also be a police officer, had reportedly helped
him to be recruited into the police academy.
Related Posts

“The man (Paul) took me to the police station
and assured that he would recruit me. He later printed an acceptance letter
which he gave me as the commencement of my training. He recommended books which
I bought and he urged me to read them as part of my training for the 4 years I
stayed there. I went back to my people who donated N130,000 which I gave to
Paul.

“I have been
collecting things such as money and food items from my people for him during
the period. And when he told me that I was going to pass out on February 3,
2017, I organised my people who went to thank him while I also did a
thanksgiving in the church,” he claimed.
The suspect, who is a native of Naka in Gwer local
government area of the state has conversely admitted that he bought the uniform
and gave it to an unsuspecting police tailor who helped him out with the sewing.
The spokesman of Benue state police command, Moses Joel
Yamu, has used this case as an example to alert job seekers to be careful of
questionable job placements.
CrimeNews
Share

Top 10 list of the most admired companies in the world. Apple tops for the 10th time.