Photo: 23-year-old Man marries his 40-year-old MOTHER and also expecting his child from her

By Andre Falana On Feb 15, 2017
Share
Join Us On Telegram
Related Posts 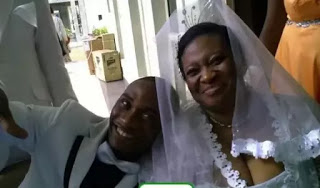 This world is fast coming to an end according to religious people.
A mother getting married to her son and even expecting her grandchild whose
father turns out to be his mother’s son. What a world.


This jaw breaking incident
happened in a village in Zambia but the two of them later relocated to an
unknown place.

The 40-year old woman, Mbereko who was a window for 12 years
and her 23-year old Farai Mbereko claimed to have been in love with each other.
All thanks to his mother’s pregnancy that took their relationship to another
level, according to them.
The mother felt it’s time move ahead with her son by getting
‘Married’ to son when her pregnancy reached six months. She doesn’t want marry
her other brothers’ in-law (late husband’s brother) who wished to get her as a
wife.
The village court council was utterly dumbfounded last week upon
hearing about Mbereko’s matter with her son, which started three years ago. As
a mother who spent a lot of money in sending her son, Farai to school, so she feels
she is the only woman that should have access to his money, and not another
woman, according to her.

“Look, I struggled
alone to send my son to school and no one helped me. Now you see that my son is
working and you accuse me of doing something wrong. Let me enjoy the products
of my sweat,” she voiced out to the village court council.
From the son’s side, Farai claims to be more happy and
willing to marry his and informed his mother’s family that he ready to clear
the remaining bride price his father still owed them when he died.
He said, “I know my
father died before he finished paying the bride price and I am prepared to pay
it off.”

“it is better to
publicize what is happening because people should know that I am the one who
made my mother pregnant. Otherwise they will accuse her of promiscuity.”
News
Share