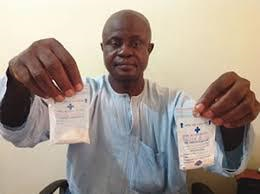 Professor Francis Otunta who is currently the Vice Chancellor of Michael Okpara University, Umudike, has claimed that his University has discovered a drug that

cures HIV/AIDS. We hope this is real.

Otunta disclosed this to press at the campus and said that, following years of research, Prof. Maduike Ezeibe, a researcher at the university, made the discovery. The drug was presented to the management of University and also to Ezeibe’s counterparts in the medical line who approved his findings.
Related Posts

Professor Ezeibe of Veterinary Medicine and Clinical Virology, revealed that some of the components used in producing the drug are; Aluminum Silicate and Magnesium Silicate (Synthetic Aluminum-Magnesium Silicate).
The drugs was tested on 10 people living with HIV/AIDS in order to confirm its potency. They were administered after several months of tests and the outcome proved satifying and encouraging.
Ezeibe disclosed that the result of the tests has been published in scientific journals.
To further defend and authenticate the potency of the drug, Ezeibe did a presentation on his discovery at the World Virology Conference in Atlanta and another held in Texas. So far, there has allegedly been no report to disprove the drug.
Ezeibe wants the Government to help secure international patency for the drug since it has been patented in Nigeria. He believes it could be a great and major foreign exchange earner for the country.
News
Share

Man slumped and died during early morning exercise around Ilupeju