National March for Alexis Sanchez to leave the Arsenal

By Andre Falana On Feb 18, 2017
Share
Join Us On Telegram
Arsenal FC icon, Alexis Sanchez who is a two time continental champion in 2015 and 2016 with the national side, Chile and a player who hardly disappoints and very dedicated but appears to have always shoulder the responsibilities of 10 players when the team tends to fade away, according to Chileans. Recently, due to Copa America win he was named in the team of the tournament.

Chile football fans have called on their star man to leave Arsenal. They made this known by creating a Facebook event which 5,000 Chileans have committed to attend on March 1. Overall, almost 7,000 of these fans have shown their interest to join this National march for Alexis to leave Arsenal.
This campaign is entitled “Marcha Nacional para que Alexis Sanchez deje el Arsenal”, which means “National March for Alexis Sanchez to leave the Arsenal” in English. 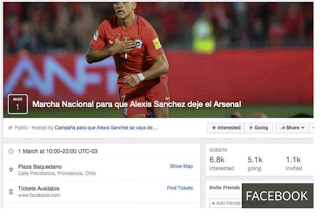 “We, as Chileans, are tired to watch one of our biggest stars play on his own to make his team get through.

“We don’t want him to play at Real Madrid, nor go back to Barcelona, we don’t give a f**k where he plays, we just want him to fight along with 10 other players to get the results.

“He doesn’t deserve to be alone.”

However, Sanchez’s future at Arsenal still remain unclear as he is yet to sign a new contract and his current deal will end in 2018.
Rumours has it that both Juventus and Paris St-Germain are highly interested in signing this world class player when the next transfer window opens.
Present, Sanchez has bagged 20 goals in all competitions for the gunners this season, the only person close  to him is Theo Walcott, 14 goals.
NewsSport
Share

MTN And Lumos To Launch Mobile Electricity On Monday