Man sentenced to ‘abstinence until marriage’ for rape 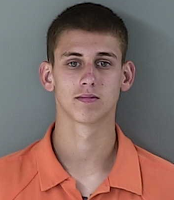 Judge Randy
Stoker of the Fifth District of Idaho has sentenced a 19 year old man, Cody
Herrera, to ‘abstinence from sex’
rather than serving a jail term after being convicted for raping a 14 year old
girl.
According to New York Times report:

‘Mr. Herrera was
sentenced last week to five to 15 years in prison, but the sentence was
suspended in favor of a rehabilitation program of sorts that serves as a middle
ground between probation and prison time.’

‘Based on Mr. Herrera’s success in the
program, a judge could opt to release him on probation or send him to prison to
serve the original sentence. The program usually takes about six months.
Related Posts

‘Anyone free on
probation is, of course, not allowed to break the law. And Judge Stoker made
clear that would include fornication.’

‘The fornication law
calls for a fine of up to $300 and six months in prison for any unmarried
person who has sexual intercourse with an unmarried person of the opposite sex.
Mr. Loebs said there are no
“bedroom police,” but if someone on probation is
required to not break any laws, that would be one of laws they cannot break.’

Judge Stoker said: “If
you’re ever on probation with this court, a condition of that will be you will
not have sexual relations with anyone except who you’re married to, if you’re
married,”

“I have never seen
that level of sexual activity by a 19-year-old,” Judge Stoker said, when he
heard Herrera had 34 sexual partners.
CrimeforeignJudiciary
Share