By Andre Falana On Feb 8, 2017
Share
Join Us On Telegram
A man Matthew Mobley in the US has been detained and booked
into the same jail for the 77th time. 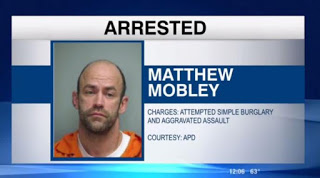 business, they heard a man yelling and found
out that he was stuck in the chimney. So they decided to contact the Police.
The incident took place on early Friday morning.

While officers were in route, police say the man was able to
free himself from the chimney. He then threw a brick at an employee before
running from the store.
After Officers being able to locate the suspect, they identify
him as 41-year-old Matthew Mobley of Alexandria.
Police claimed this is the 77th time Mobley has would be
booked into the Rapides Parish Detention Center.
“This is Mobley’s 77th booking into the Rapides Parish
Detention Center. He’s facing charges of attempted simple burglary and aggravated
assault”
Crimeforeignjail
Share

Woman gave birth to goat in Port-Harcourt after 2years