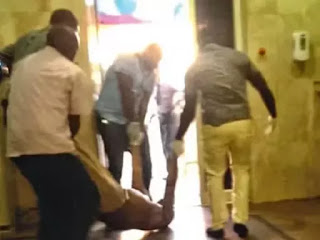 A man in his late 30s, identified as Peter Ibekwe who resides in the Ogbor Hill area, Aba , Abia State was found dead in a hotel room within the same city, on the weekend.

According to The Sun, he was said to have told his

wife that he was going on a business trip to Umuahia, the Abia State capital.

Rather than travelling to Umuahia, the deceased went and lodged in a hotel located on Club 25 road, Abayi Aba in Osisioma Local Government Area of the State.
Ibekwe, who was said to have entered the hotel around 7:30pm the previous night, was later found dead in his room the next morning by the hotel cleaners during their cleaning exercise. Initial attempts to open the door to his room proved abortive when they wanted to tidy it, so they had to apply force.
Related Posts

“It was after initial efforts failed that some workers at the hotel forced the door open only to see the lifeless body of Mr. Ibekwe.

“The hotel management informed the police about the incident. The man’s relations were equally contacted before his body was taken from the hotel to the mortuary”, a source told Sun
The source who wished to remain anonymous, also said, the sum of N200,000 was found in the room by police from Abayi Division when conducting room search.
The cause of the man’s death is still unknown as at the time of reporting, however, an autopsy carried out on his body might fetch out a reason for his demise, the source disclosed.
The Abia state Police Public Relations Officer, PPRO, ASP Ogbonnaya Nta could not be reached for comments. Nonetheless, a senior police officer who confirmed the occurence of the incident said, investigation into the matter had already commenced.
He added that details on outcome of the invistigation will be made public when due.
MysteryNews
Share

Soldier sentenced to death by hanging in Abuja