By Andre Falana On Feb 23, 2017
Share
Join Us On Telegram
The Registrar of Joint Admission and Matriculation Board (JAMB) Prof. Ishaq Oloyede, says the 2017/2018 Unified Tertiary Matriculation Examination (UTME) has been scheduled to hold in May 2017. 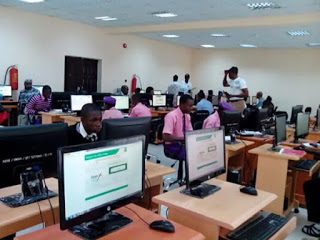 Speaking at the 2017 Nigerian Academy of Letters Annual Lecture on Thursday in Abuja, Oloyede said that the delay experienced in the sales of the forms was due some logistics.
He said that the board had eliminated the use of scratch cards owing to the fact that many students were victims of extortion from cybercafe attendants.
The JAMB’s Registrar said that the board working on some strategies that would ensure the examinations are conducted without any drawback.
He went further by saying the board had consulted other relevant examination bodies to make sure there is no clash in any examination.
Related Posts

“We have observed that people are selling fake forms but what we are doing is to try to sanitise the system and as soon as the sanitisation is done we will start selling the forms.

“In any case, JAMB has invited other examination bodies, there will be no clash but we want to hold the exams when it is appropriate.

“You also know that if we conduct the examination in March, the result will come out almost immediately but the result cannot be used until August or September.

“So, we have to keep the results and that will give room for people to be thinking it’s possible to upgrade.

“But, if we conduct our examination very close to when the result is needed the possibility or perceptions for upgrading will not be there.

“We need to reassure stakeholders that those selling fake forms are gone. We are not going to sell out forms through the other process.“We will start the sale of the form and by May the examination will be conducted,” He added.
“There is no offline registration, people extort students by collecting money from them but the worst is the mismatch of picture, data and biometrics,’’ Oloyede explained.
EducationJAMBNewsProf. Ishaq Oloyede
Share

Samsung Galaxy S8 to be launched on April 21

How to check your 2017 JAMB result