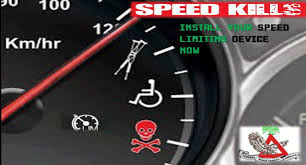 Federal Road Safety Commission, FRSC, notified the public and said it had started impounding commercial vehicles that do not have

the Speed Limiting Device and will start with private vehicles.

During a visit to Vanguard Newspapers corporate headquarters in Apapa, yesterday February 1st, 2017, Mr. Emmanuel Edeh, the Apapa Unit Commander, Assistant Corps Commander, admonished motorists to ensure that they install the Speed Limiting Device.
He stated that “Those who have not installed the Speed Limiting Device should ensure that they do so. Speed has claimed a lot of lives. The lesser the speed, the lesser the impact in case of accident. A commercial vehicle is made not to exceed 90 kilometres per hour. That is the need of this Speed Limiting Device. We are starting with commercial vehicles.
Related Posts

“As at now, the enforcement is for  commercial vehicles. As time goes on it will get to private vehicles. That is why we carried out enforcement this morning and made some arrests. There is need for people to know that according to Corps Marshall and Chief Executive of FRSC, we have been mandated and directed to start full enforcement, which we started today.“

According to him, his visitition was to inform the vehicle owners within the country that the full enforcement of Speed Limiting Device by FRSC has commenced on February 1, 2017.
He went further by saying, “Since 2016 we have been advising people on the need to install Speed Limiting Device in their vehicles as it is contained in Section 119 (6) of the National Road Traffic Regulation (NRTR) 2012, which states that all vehicles plying any public road shall be in possession of Speed Limiting Device.