The European Union has reacted to the continued incarceration
of the leader for Indigenous People of Biafra, IPOB, Nnamdi Kanu and other
Biafra agitators and also said it is monitoring his trial.

This was enclosed in a letter signed by vice president of
the European Commission, Federica Mogherini, to Members of the European
Parliament who were signatories to a letter to Kanu sent in December 2016,
accusing Nigerian Government of human rights abuse.
Julie Ward, who is a member of the EU and also a supporter of
Biafra, has strongly condemned the detention of Nnamdi Kanu.

She wrote: “I fully share your concern on the
violence that has erupted in relation to the Biafra movement. Individuals
should be allowed to protest and express themselves freely as long as they
exercise this right in a peaceful manner. Their prosecution, if founded on
facts, should be carried out in full compliance of the rule of law, their human
rights and judicial due process.”
The European Commission vice president, Federica Mogherini
said Nigeria is expected to fulfil human rights commitments with the European
Development Fund, as 166 million euros
was allocated to support the “fairness,
transparency and accessibility of the justice sector governance reform and the
fight against corruption.”
Find the letter and Video below: 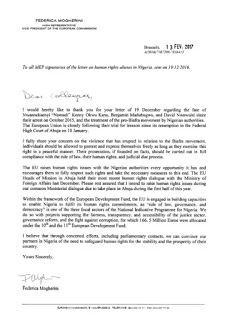