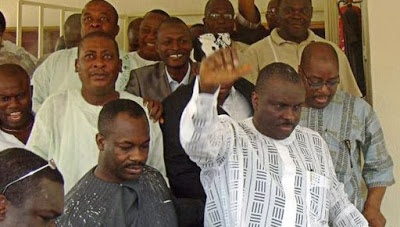 James Iboris, the former Delta State governor, who arrived back in Nigeria in the early hours of today,

Saturday 4th, has been reportedly picked up by Operatives of the Department of State Services (DSS).

Although, according to an official who spoke with the media, said it should not be seen as an “arrest”.
Related Posts

“It was pre-arranged that he should have a chat with the DSS director-general, Lawal Daura, upon his arrival.”

“He will not be detained. His appointment was for 12:00 hrs so the operatives went to pick him up and drove him down for the meeting,” He said.
Recall that he was just finished serving a 13-year jail term in UK after being convicted of fraud.
Ibori landed at the Nnamdi Azikiwe International Airport in Abuja and was slated to travel to his hometown in Oghara, Delta State.
CrimeNews
Share

Medals to be made from mobile phones for Tokoyo 2020 Olympics