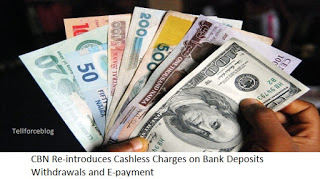 The Central Bank of Nigeria, CBN, yesterday, February 23,
2017 has bring back charges on cash deposits in banks, which would be implemented effective
from April 1, 2017 for some locations within the country, by implication different
operational dates in different parts of the country.

Mr. Dipo Fatokun who is the director of Banking and Payments
Systems Department, has announced this in a circular titled: “Circular on nationwide implementation of
the cashless policy.”

“The new charges would
take effect from April 1 2017, in the existing cashless states (Lagos, Ogun,
Kano, Abia, Anambra, Rivers and the FCT).

“The policy shall be
implemented with the charges taking effect on May 1, 2017 in the following
states: Bauchi, Bayelsa, Delta, Enugu, Gombe, Imo, Kaduna, Ondo, Osun and
Plateau.

“The policy shall be
implemented with the charges taking effect on August 1, 2017 in the following
states: Edo, Katsina, Jigawa, Niger, Oyo, Adamawa, Akwa Ibom, Ebonyi, Taraba
and Nasarawa.

“The policy shall be
implemented with the charges taking effect on October 1, 2017 in the following
states: Borno, Benue, Ekiti, Cross River, Kebbi, Kogi, Kwara, Yobe, Sokoto and
Zamfara.

“The income generated
from the processing fees charged above the allowable cash transaction limits
shall be shared between the CBN and the banks in the ratio of 40:60 Existing
exemptions remain sustained for: Revenue generating accounts of the federal,
state and local governments (lodgements only); embassies, diplomatic missions,
multilateral and aid donor agencies in Nigeria are also exempted from all
processing fees relating to the cashless policy implementation.

“In view of the above,
branches of deposit money banks in the affected states are expected to
commence: the enlightenment of their customers on the cashless policy,
including the limits; on cash withdrawals and deposits for individuals and
corporate bodies, as well as the available e-payment options;

“Training of staff on
the cashless policy, in order to provide answers to enquiries and handle
issues/customers’ complaints, as well as provide advice on the policy; media
communication, to complement existing CBN’s and Bankers’ Committee’s media
campaign.

“Engagement of key
bank’s customers and other stakeholders. All banks are to ensure that their
cashless teams in the affected states liaise properly with the cashless office
in the CBN for necessary clarifications and further assistance, if required.”
Cashless policyCBNfinanceNews
Share

AfriOne 2-in-1 Tablet-Laptop for N-Power