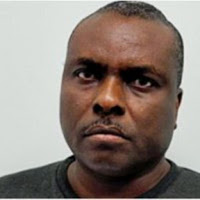 James Onanefe Ibori, the former Governor of Delta State, who was recently released from a United Kingdom’s prison in the has landed in Nigeria.
Ibori should be in his home town now because he is expected bythe people in his hometome around 11am today.
Ibori’s flight British Airways landed at the Nnamdi Azikiwe International Airport, Abuja at 5.37am.
Ibori was released from British prison in last month after serving almost 7-years out of his expected13-year sentence, taking into account pre-trial detention.
ALSO READ:  Reps move against commercialization of Navy led, by Shorefac Consortium Limited
Advertisment

Pray for Nigeria, continue to support Buhari and pray for him...