By Andre Falana On Feb 20, 2017
Share
Join Us On Telegram
Related Posts 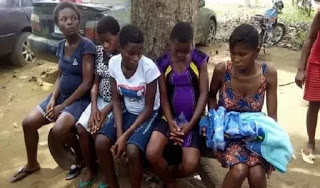 The Men of Operation Safe Haven (OPSH) has discovered a baby
factory along Old Bukuru Park, Jos, Plateau state and arrested thirteen people
allegedly to have been the operatives.

Major General Rogers Nicholas who is the OPSH Commander, while
parading the suspects, said, the group had an organized market for trading infants
in Lafiya in Nasarawa state and the FCT.
A onetime victim of the suspects, Happiness John, gave the
OPSH the information about the factory which led to the arrest of 13 suspects (nine
males and four females), including a pregnant woman.
The Commander said, “This
is an issue that is now bothering us within the North Central and based on
intelligence, our men were able to trace the location of the baby factory. This
raid will continue to ensure that such evil acts are trashed.”
Happiness re-counted her experience saying: “During my first pregnancy almost two years
ago, my friend, Zubaida came to me and told me that I should come and stay with
her in a separate room so that when I gave birth, she would take me to Lafia in
Nasarawa state to sell the baby and get capital to start a business. She told
me she had once sold her twins in Abuja but I rejected the idea.”

“When I had the second
pregnancy, Zubaida and her friend came and took me to a room around West of
Mines in Jos and gave me hard drug. I later found myself in my aunt’s room
having delivered a baby. I immediately returned home with my baby and told my
mother who accompanied me to security agents,” She added.
According to Daily Trust, the three of the women arrested denied
being part of the business but an obviously pregnant lady among them, Mildred
Luke, said she was impregnated by one of the men now on the run.
Mildred said, “They
promised me N350,000 for a boy and N300,000 for a baby girl while N400,000 will
be paid to me if I delivered twins.”
CrimeNews
Share