As a fan of Trump, Just checkout this gold-plated Trump iPhone

By Andre Falana On Feb 28, 2017
Share
Join Us On Telegram
Are you are die-hard fan of the United State president,
Donald trump? What are you waiting for?
Order one or more of those gold-plated Trump iPhones. The phone
has the face of the US president crested on its back and also with diamonds encrusted on
the iPhone logo and its sides. 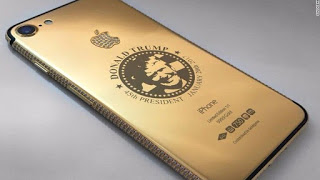 According to CNN Money report, the gold iPhones have been in
market since December 2016. The report said that the development started when a
Trump fan hop into a Goldgenie store
in November 2016 requesting for customized gold iPhone, so her family could present
it to Donald Trump after his inauguration in January, 2017.
The phone goes for just $151,000 only. Not too expensive, so
place your order from GoldGenie and feel among.
mobile
Share