Apple to begin iPhone production in India by April

According to report last month, Apple had reportedly appointed
a Taiwanese ODM Wistron to start assembling iPhones in India. Priyank Kharge,
IT minister of the Indian state of Karnataka, has now made the news it official
during an interview with Bloomberg that manufacturing will commence in Bangalore
by the end of

He said, “Apple’s
iPhones will be made in Bangalore and all devices will be targeted at the
domestic market.”
Related Posts 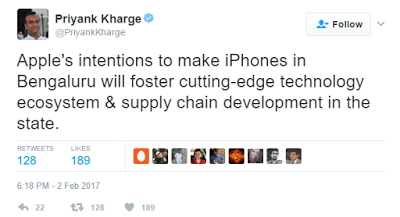 Apple has reportedly been negotiating with the Indian
government for months and is still ongoing according to the report. Apple has allegedly
asked for a 15-year tax break.
If this plan materialized, Apple will be able to gain more
presence within a country where it has extreme low market share. It was
reportedly to have shipped 2.5 million iPhones to India but was only able to
secure 10th position in a market share which Samsung leads and controlled
by Android.
Apple Should please come to Nigeria.
mobile
Share