By Andre Falana On Feb 26, 2017
Share
Join Us On Telegram
What can Manchester United do this season without Zlatan?
Manchester United football club has recorded its first major
trophy win under Jose Mourinho after beating Southampton 3-2 at Wembley in the
English Football league cup final this today, February 26, 2017. It was a fierce
battle between the two teams which gave the fans a worthwhile final. 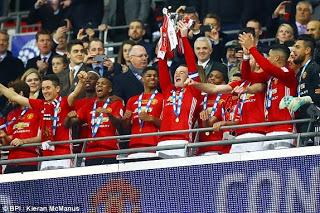 For Mourinho, this will be the fourth league cup for him in
four finals.
Speaking to Sky Sports after the final, the match winner
said:

“I came to win, the
more I win, the more satisfied I get,’ Ibrahimovic told Sky Sports.You
appreciate it [winning cups] more the older you get. At the beginning it’s fun.
Now I’m older, it’s about collecting trophies. This is what I predicted.
Everything I saw has happened. Too many i couldn’t do it but I keep going and I
am enjoying the game.”
Watch the goal highlights below:
EFL Cupmanchester unitedSouthamptonSport
Share

CAF election: Pinnick is on your own- Dalung

UK to commence trial of Diezani Alison-Madueke, in June

Serena Williams pregnancy gives her advantage over other when playing- Australian…

Eba and Egunsi was secret of my success – Joshua after…