By Andre Falana On Jan 30, 2017
Share
Join Us On Telegram
The founder of Omega Fire Ministries Worldwide, Mr Johnson Suleman, has claimed that his invitation by the Nigerian Department of State Services (DSS) is in order.

Suleman during the briefing with the press in Abuja on Monday said
“I presume the right thing was done. They have been in touch with me to come and that is why I am in Abuja, so that I can see them.”
Related Posts

He also noted that his last statement was actually based on information from a reliable source that herdsmen were coming to attack him.

He said that he stood by his statement on self defence.
“I was talking in my personal capacity on information from a reliable source that certain people in the capacity of Herdsmen were coming to attack me and I told the people around me that if it happens they should defend themselves.”
Suleman advised his supporters at a religious crusade in Ekiti recently to protect themselves if they were attacked by the so call herdsmen.

At the gathering of this report, the Apostle was yet to report to the DSS. 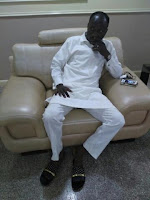 India planning to give free WiFi to more than 1,000 villages