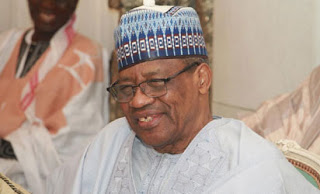 Former Head of State, Gen. Ibrahim Babangida during prayers
to mark his 75th birthday celebration at the Hilltop, Minna, Niger State.
Speaking on the occasion of the 2017 Armed Forces Remembrance Day Celebrations,
Babangida expressed joy that this year’s
celebration is coming at a time our armed forces are gaining more ground
in the fight against insurgency.
In a statement by his media office, IBB said, “As  we celebrate the Armed  forces remembrance day, we should  take a stock of our uniqueness and sacrifices
by our men  and women of the armed  forces especially the fallen heroes that paid
the supreme  sacrifices of  maintaining peace not only in our country but
beyond the shores of Nigeria”.
Commending the military for containing Boko Haram
terrorists, Babangida posited that recent events across the country on general
insecurity and economic sabotage are  a
source of concern to every well-meaning Nigerian.
Meanwhile, Niger State Governor  Abubakar Sani Bello has expressed displeasure
over the way and manner soldiers who fought for the peace, unity and progress
of the country are neglected and pleaded for a special attention and support
for them.
He made the passionate plea during the launching of   the 2017 official launch/ sale of poppy to
mark the Armed Forces Remembrance Appeal Week, held at Government House, Minna.
Announcing a cash donation of N6million, on behalf of the state government and
a personal donation of N250, 000, the governor directed all local government
councils in the state to support legionnaires.
Source: Vanguardngr
ALSO READ:  Another Xiaomi Redmi Note 7 Explodes, Following The Redmi Note 7s Case
Advertisment