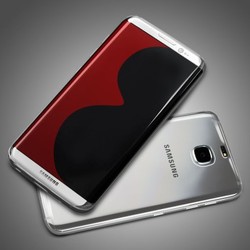 Seriously! No home button? If we believe the unbridled fantasies of case makers like Olixar, this below is close to what the Galaxy S8 edge
should look like. The British accessory shop MobileFun often tips on
upcoming phone designs based on the renders they receive from case
makers on actual products to put in their database, and a lot of the
time the images have turned out pretty similar to what
actually gets
announced later on.
Case makers like Olixar are
often combining rumors, leaked schematics, and general guesswork to
design their wares before the phone hits the shelves, but they sometimes
also do have real scoops on the exact dimensions, so that might be how
the Galaxy S8 ends up looking like. What we see is a very narrow bottom
bezel, thanks to the disappearance of the physical home key,
and LED flash/pulse meter combo placed way above the camera on the
back. In addition, the render depicts a curved Dual Edge display (duh).
The
wallpaper is also pretty intriguing, as it shows a stylized number 8,
similar to the blue 7 that is shown in official renders of the S7
and S7 edge phones, so that’s not improbable, too. Take these case
maker tips with a grain of salt, as sometimes they are simply ways to
attract attention to the brand, but in other instances their renders
have been based on some legit research, so the Galaxy S8 edge may very
well end up looking similar to this graphical work.
Source: Phone Arena
Join Us On Telegram
ALSO READ:  Your iPhone Will May Soon Replace Your International Passport and Driver’s License
Advertisment

Teleology Holding Gets 90 Days To Pay $450m For 9Mobile